As you can imagine, though, this isn’t the only difference. Like the Irish vs. English Breakfast tea, there are plenty of variations between these two blends.

Here is a closer look at how they are quite dissimilar to one another:

To understand the main difference between these two teas, you first have to appreciate the basics.

So, let’s take a look of what the base components of these two teas are.

In the early days, it would have consisted of tea sourced from China. However, as time passed, blenders began to incorporate more of Sri Lankan and Indian teas.

These days, most English breakfast teas are largely made up of Ceylon tea.

Here, however, there isn’t as much consistency in the kind of tea that is used.

Earl Grey may be blended with any kind of black tea from Ceylon to Assam.

What sets Earl Grey tea apart from the English breakfast tea, is that the former is infused with bergamot.

Bergamot belongs to the citrus family. Blenders may use bergamot peel or oil to flavor the tea.

There are actually several types of Earl Grey tea on the market.

Sometimes, bergamot is added to other kinds of tea as well, such as green tea.

It may be even be infused into non-true teas such as rooibos.

With the basics covered, let’s take a look at how these teas differ in their flavor profiles.

The taste of Ceylon tea will depend where and how the tea is grown.

Thus, you can expect some variation.

Despite this, English breakfast tea tends to be bold, full-bodied, and dark.

Now, if you prefer something more robust or with a malty taste, you should check out our selection of the best Irish breakfast tea.

Since the sources for the black tea used in Earl Grey tea can vary, the undertones of this tea can be rather unalike from one another.

However, what is most notable in this blend is the bergamot.

It has a distinct lemon and floral taste with a hint of grapefruit.

How Do You Drink English Breakfast and Earl Grey Tea?

It is interesting to take note of how each of these teas are consumed.

English breakfast is strong and robust. Due to this, it holds up well to the addition of milk and sugar.

These ingredients help to cut through the bitterness of the tea.

Some individuals may drink English breakfast tea plain or with a squeeze of lemon.

So, what about Earl Grey tea?

It is most common for Earl Grey tea to be drunk by itself.

After all, the bergamot is flavor enough for many individuals.

However, some individuals do add milk and even sugar to their beverage.

This has been iconized by tea and coffee shops with the introductions of London Fog or Earl Grey Latte.

A Comparison of Health Benefits

Let’s take a look at the benefits of drinking these teas on a regular basis.

There are actually a number of health advantages for drinking English breakfast tea.

This includes reducing your risk of cardiovascular disease, stroke, and even cancer.

There is also some evidence that it can lower your cholesterol and stress levels.

Since this tea has a rather significant caffeine content, it is also great as an energy boost and improving your memory and concentration levels. 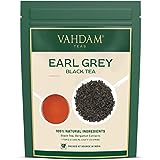 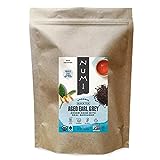 Since Earl Grey tea largely consists of black tea, it has many of the same advantages as English breakfast tea.

However, bergamot has its own benefits for health.

To begin with, bergamot contains antioxidants which are useful for fighting free radicals and reducing cell and tissue damage.

Furthermore, this ingredient could boost heart health and improve your digestion.

This could be done through the reduction of inflammation in the digestive system.

There is also potential as a remedy for pain and ulcers.

Despite their numerous health benefits, there are some precautions to take when drinking either of these teas.

English breakfast tea is rather high in caffeine. As a result, drinking too much can result in jittery movements, irritability, and altered sleep patterns.

At the same time, you should be concerned about drinking English breakfast tea through pregnancy.

Most doctors will advise you to limit your caffeine consumption during this period.

The tannins in tea can also reduce the absorption of iron by your body.

So, drinking a great deal of tea could potentially lead to a deficiency, particularly if you are already at risk for this condition.

Even if you aren’t pregnant or sick, you should still try to limit your consumption to about 2 to 3 cups a day.

Drinking excessive amounts of Earl Grey tea can have its own set of problems.

This is because a high concentration of bergamot can block potassium absorption.

In turn, this deficiency can cause symptoms such as cramps and blurred vision.

Once again, you should limit your consumption to just a couple of cups a day.

These are the differences – and similarities – between English breakfast and Earl Grey tea.

Now that you can understand them, you may be able to choose the right tea for you in the future.

If you enjoyed this post, head over to our Pinterest page. We have tons of posts on various kinds of tea from around the world.

Dr. Dheena Sadik
Dr. Dheena Sadik is a consultant Nutritionist and Dietician. She has over a decade of experience in the health and fitness industry.
Learn more
An Important Disclaimer: The information on this site is not intended or implied to be a substitute for professional medical advice, diagnosis or treatment.
Affiliate links / Images from Amazon Product Advertising API. Tea Leafed is a participant in the Amazon Services LLC Associates Program, an affiliate advertising program designed to provide a means for website owners to earn advertising fees by advertising and linking to amazon (.com, .co.uk, .ca etc) and any other website that may be affiliated with Amazon Service LLC Associates Program. As an Amazon Associate I earn from qualifying purchases.
Copyright © 2023 · Tea Leafed · All Rights Reserved