Shining a Light on the Best White Tea Brands

White tea is not nearly as popular as its black and green counterparts.

As such, if you are thinking of testing out this beverage, you may not know which are the best white tea brands to buy.

Here, you can learn everything there is to know about white tea including what brands you should be purchasing.

If you want a premium white tea, then you should opt for the Tealyra brand. The quality and flavor make this an excellent investment. 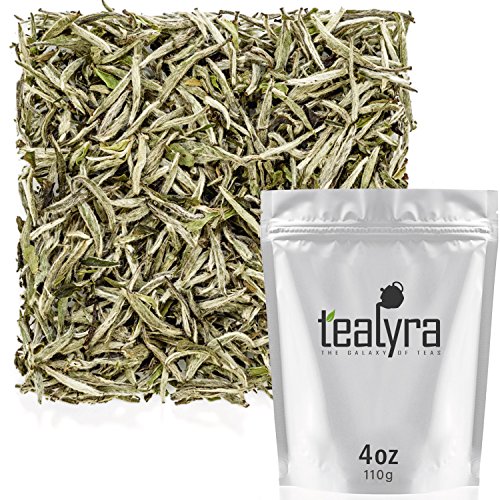 If you prefer the convenience of tea bags, then Uncle Lee’s tea will ensure that you get the best possible quality. 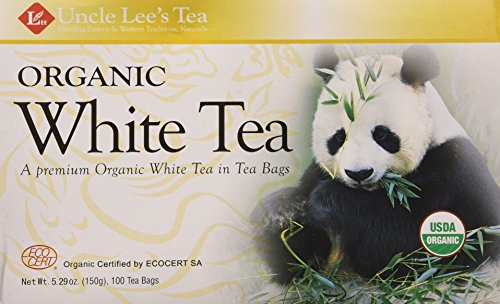 If you are looking for a reliable brand, consider Davidson’s, particularly when buying white tea. 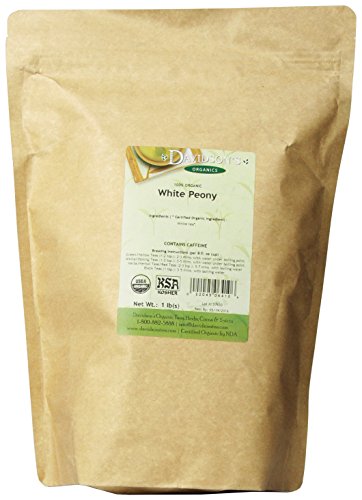 What is White Tea?

No thanks, take me to the Top White Tea Brands

First, let’s try to understand what white tea actually is.

Although this type of tea is made from the Camellia sinensis family, it is far more delicate than other true teas.

There are two main reasons for this.

First, white tea is derived from new growth buds and young leaves of the tea plant – other teas are made from more mature plants.

These buds are covered in fine silver hairs which is how this tea gets its name.

As white tea isn't all that popular, you might be curious to know what it tastes like.

The flavor of white tea will depend on how it is grown and processed. Thus, you can expect the taste to vary from one brand and blend to the next.

On average, white tea has a very mild flavor and aroma. When compared to other true teas, this type of tea can even be described as sweet.

Floral notes in this tea are more common, but you may notice a hint of herbal flavor coming through in certain blends.

Green tea isn't the only healthy tea around – white tea boasts quite a few health benefits as well.

To appreciate the health benefits of white tea, you must first understand the important components in these leaves and the role they play.

A literature review compiled the many advantages of white tea. Let’s take a look at what it has to say:

The main elements in white tea are catechins which have significant antioxidant activity.

The most prominent catechins in white tea are EC, EGC, ECG, and EGCG.

As such, white tea has a varying number of potential health benefits. These include:

Cardiovascular disease is a major problem in the Western world. Fortunately, white tea may help to prevent the problem on several different levels.

To begin with, the catechins in white tea have shown to have an anti-thrombogenic effect on the cardiovascular system.

This can work to prevent the creation of clots in arteries.

The tea may also cut down on the risk of high blood pressure as well as reduce inflammation and the impact of free radicals.

All in all, this helps to improve the condition of your heart.

It has also been found that white tea may assist in reducing the risk of cancer.

Thanks to the anti-carcinogenic and anti-mutagenic activities of the catechins, white tea could play a role in preventing cells from multiplying out of control.

Naturally, this could stop several cancers from forming.

While diabetes can be treated, it can’t be cured.

This is why most doctors and medical experts would prefer to prevent the disease from taking hold in the first place.

There is some potential for white tea to be used in this capacity.

White tea can help to balance out blood sugar levels, while also reducing resistance to insulin.

White may also help or protect certain elements of the central nervous system.

The stress reduction activity of the tea can help to calm individuals and potentially reduce the effects of caffeine.

On the other hand, certain stimulant effects of the tea could potentially aid individuals with conditions such as ADHD.

Last, but not least, there was evidence to show that white tea may be able to reduce the symptoms of depression.

White tea has shown some success in being effective against microbes, fungi, and viruses.

Needless to say, this means that it could help to ward off many diseases that stem from these agents.

At the very least, it could help to reduce or minimize the symptoms associated with these conditions.

There is no denying that obesity is becoming a problem all over the world.

It is helpful to know that white tea has several mechanisms that can help combat this.

One of the ways that white tea can be beneficial is by improving the lipid metabolism of the liver.
This makes it easier for fats to be broken down and used for energy.

At the same time, it is useful in blocking the lipase enzyme, preventing fats from being absorbed by the stomach.

White tea may also be able to increase thermogenic activity, boosting how much energy you expend.

Finally, white tea may play a role in the modulation of your appetite.

Most people assume that white tea isn't caffeinated, but this isn't true.

Instead, white tea tends to have less caffeine than types such as oolong and black tea.

Depending on the blend and how you have brewed your white tea, you can expect between 6mg to 75mg in each cup.

Due to this, you do have to monitor your intake of white tea.

Drink too much and you may find yourself feeling restless or even experiencing changes in your sleeping patterns.

How to Choose High-Quality White Tea

Here are some factors to consider when selecting white tea:

It is not uncommon to find white tea grown in various parts of the world.

However, if you want to enjoy a proper cup of white tea, look for brands that source the leaves from China.

In particular, buy white tea grown in the Fujian Province in the counties of Fuding, Jianyang, and Zhenghe.

Be warned that these white teas may be more expensive. Thus, if you wish to purchase a more affordable option, you can look for white teas grown elsewhere.

Silver Needle is the most expensive strain, but boasts a delicate sweet flavor and a wonderful aroma.

White Peony is the less expensive option but also has a far stronger taste.

Tribute Eyebrow is named for the curved shape of the leaf. This strain has an earthier flavor than the others.

The Long Life Eyebrow tea can be identified by its larger teas. You will also find that this tea is more oxidized than the rest.

Darjeeling white is the least exclusive of the white teas. It is traditionally grown in India and is readily available.

There is some concern about the presence of heavy metals in Chinese soil where teas are grown.

While all tea estates haven’t been tested, it can be difficult to know where your tea is coming from.

Thus, to put your mind at ease, you may want to invest in organic white tea bags or loose leaf tea.

Here are some of the best and healthiest white tea brands on the market. 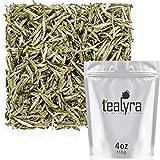 416 Reviews
Tealyra White Silver Needle Tea
If you want a premium white tea, then you should opt for the Tealyra brand. The quality and flavor make this an excellent investment.
CHECK PRICE
What We Like:
What We Don’t Like:

2,999 Reviews
Uncle Lee’s Tea White Tea
If you prefer the convenience of tea bags, then Uncle Lee’s tea will ensure that you get the best possible quality.
CHECK PRICE
What We Like:
What We Don’t Like:

24,013 Reviews
Davidson’s Tea White Peony
If you are looking for a reliable brand, consider Davidson’s, particularly when buying white tea.
CHECK PRICE
What We Like:
What We Don’t Like: 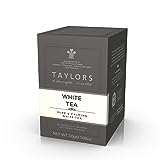 23,031 Reviews
Taylors of Harrogate White Tea
With this tea, you can enjoy the wholesome quality and mellow flavors, courtesy of a brand that you can recognize and trust.
CHECK PRICE
What We Like:
What We Don’t Like: 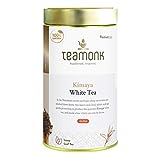 248 Reviews
Teamonk Kimaya White Tea
If you are looking for a holistic, yet stronger tasting tea, this will be a great brand.
CHECK PRICE
What We Like:
What We Don’t Like:

These are the best white tea brands on the market. You can find what you are looking for regardless of whether you are a novice or expert on white tea.

If you would like to learn more about true teas, make sure to hit up our Facebook page. You can find a lot of other posts like this one!