Sip the Pounds Away:
Your Guide to the Best Green Tea Brands for Weight Loss

Green tea has been linked to weight loss for a long time. Many people only drink this beverage because of these claims.

However, there is more to green tea and weight loss than meets the eye. Due to this, not all green tea brands are can get you the results you want.

Thus, if you want the truth about the best green tea brands for weight loss, just go through this post.

At the end of it, you will have a much clearer idea of what you should be buying.

The Role of Green Tea in Weight Loss

No thanks, take me to the Best Green Tea Brands for Weight Loss

Do you know why green tea is supposed to help you lose weight?

Most people have no idea why this beverage has any impact on your body weight.

Since your goal is to pick the best green tea though, you first need to be aware of the exact role of green tea in weight loss.

Once you understand this, you will find it easier to pick out the top option.

You are probably aware that green tea contains caffeine. On average, an 8-ounce serving contains around 25mg of caffeine.

Of course, the exact amount depends on the type of green tea you drink.

So, what does the caffeine content of green tea have to do with weight loss? Well, research has shown that caffeine plays a role in fat loss.

In particular, the caffeine in green tea helps to boost fat loss experienced during exercise. In short, it makes your workouts a great deal more effective.

Now, caffeine isn’t the only element of green tea that helps with weight loss. The presence of catechins is rather significant as well.

One of the main components of green tea is catechins. These are phenolic compounds that perform antioxidant activities.

The most notable catechin in green tea is Epigallocatechin-3-gallate, more commonly referred to as EGCG.

It is this component that plays a considerable role in aiding weight loss.

Let’s take a look at all the different ways the catechins in green tea help you shed pounds.

Interferes with Breakdown of Norepinephrine

A key element of weight loss is fat burning. For your body to burn fat, however, it must first break down the fat within the cell and then move these substances into the bloodstream.

Norepinephrine is one of the major hormones involved in fat burning.

However, when norepinephrine is broken down by enzymes, there is less of the hormone in the bloodstream. As a result, the fat-burning capabilities of the body are reduced quite a bit.

Fortunately, ECGC can inhibit the enzyme that breaks down norepinephrine. In doing so, the antioxidant increases the amount of the hormone in the system.

The caffeine isn’t the only ingredient in green tea that makes your workouts more effective – catechins can help as well.

This is because the catechins help boost fat loss both when you are exercising and resting.

Thus, drinking green tea sometime before your workout could help you to lose more weight in the short run.

Helps to Get Rid of Harmful Visceral Fat

There are two types of body fat – subcutaneous and visceral fat.

Of the two, visceral fat is the most dangerous. This type of fat wraps around abdominal organs.

The main problem with visceral fat is that it can raise your risk of heart disease, stroke, type 2 diabetes, high cholesterol, and Alzheimer's.

The good news, though, is that the catechins in green tea can help to get rid of visceral fat. So, you won’t just be losing weight, you will also be improving your health in general.

The Synergistic Impact of Caffeine and Catechins

Yet another benefit of drinking green tea is that the caffeine and the catechins in the beverage have been found to have a synergistic effect.

This means that they work together to create a more potent fat burning effect!

What You Should Know About Drinking Green Tea for Weight Loss

Now that you know how drinking green tea helps weight loss, you should understand how much you can consume.

Although green tea is a healthy beverage, it is important not to drink too much of it. The caffeine content in the tea can cause side effects.

Most experts would advise you to drink fewer than five cups of tea a day.

You should be especially mindful of your green tea consumption if you have been diagnosed with anemia, a bleeding disorder, liver disease, glaucoma, or IBS.

Always ask a medical professional if it is safe for you to drink green tea. Also, get their advice on how many cups you should drink a day.

How to Choose the Best Green Tea for Diets

As mentioned, there are specific components in green tea – catechins – that aid weight loss.

However, catechin levels aren’t the same for all types of green tea. A variety of factors determine how much of the antioxidant will be found in the tea leaves.

Thus, if you want to select green teas with the most catechins, look out for the following features:

As you may know, there are two species of tea – Camellia Sinensis var. Sinensis and Camellia Cinesis var. Assamica.

Well, researchers have discovered that the Sinensis variety contains a greater number of antioxidants.  This is good news since this is the most common type sold.

Nevertheless, keep your eyes open for teas cultivated in Japan and regions of China outside of Yunnan.

There is also evidence to prove that green teas grown in shade have more catechins.

It is presumed that this is because these plants don’t have as much access to sunlight. They need to find other sources for energy. Due to this, they rely on the nitrogen that is found in fertilizer.

One of the more common types of shade-grown tea is Gyokuro. Matcha is also grown in the shade and can be used to help with weight loss.

It is a good idea to pay more attention to where your tea is grown. Teas grown in Chinese Zheijang are found to have more catechins.

This is possible because the terrain in this area is ideal for Camellia Sinensis. As such, it can grow to be much higher in quality.

You may already know that the most common way to process tea is via pan-frying. Nevertheless, it has been determined that steamed teas have more catechins.

Therefore, if you can get used to the taste, this is something you should consider.

While there are some steamed Chinese teas, you are more likely to find Japanese versions as this practice is more common in the latter region.

Last but not least, second harvest teas tend to have higher amounts of antioxidants.

Nevertheless, it can be difficult to find brands that will advertise their teas as being from the second harvest.

This is because first harvest teas are more sought-after due to their pleasant and light taste.

The good news though, is that second harvest teas are often a great deal more affordable.

These are the best slimming tea brands you can choose for yourself: 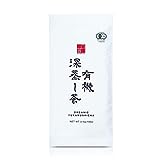 277 Reviews
Ocha & Co. Japanese Green Tea
This is a high-quality, premium tea that contains several features ideal for a slimming green tea.
Buy on Amazon
What We Like:
What We Don’t Like: 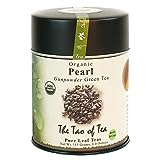 654 Reviews
The Tao of Tea Pearl Green Tea
If you enjoy a classic, strong green tea, then this is an excellent option to add to your weight loss diet.
Buy on Amazon
What We Like:
What We Don’t Like:

282 Reviews
Tealyra Dragon Well Green Tea
If you have a more discerning palate when it comes to your green tea, you are sure to enjoy the flavor as well as the weight loss properties of this brand.
Buy on Amazon
What We Like:
What We Don’t Like: 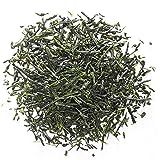 211 Reviews
Valley of Tea Gyokuro Green Tea
This tea isn’t just great for weight loss, it is also a fantastic treat, especially if you are a fan of green tea.
Buy on Amazon
What We Like:
What We Don’t Like:

2,053 Reviews
The Republic of Tea Supergreen Tea
This brand works to amplify the weight loss properties of green tea so that you can experience added benefits.
Buy on Amazon
What We Like:
What We Don’t Like:

This concludes our review of the best green tea brand for weight loss. Not all types of green tea will be equally suitable for fat loss. Thus, if you want the best results, you need to know precisely which types and brands to buy.

Miracle Cure or is Tea Bad for Ulcers?
A Guide to Ceylon Wholesale Tea
Milk in Tea: The Dos, Don’ts, and Everything in Between
Da Hong Pao Tea: The Brew Worth Its Weight in Gold
Fact or Fiction: Does White Tea Have Caffeine?